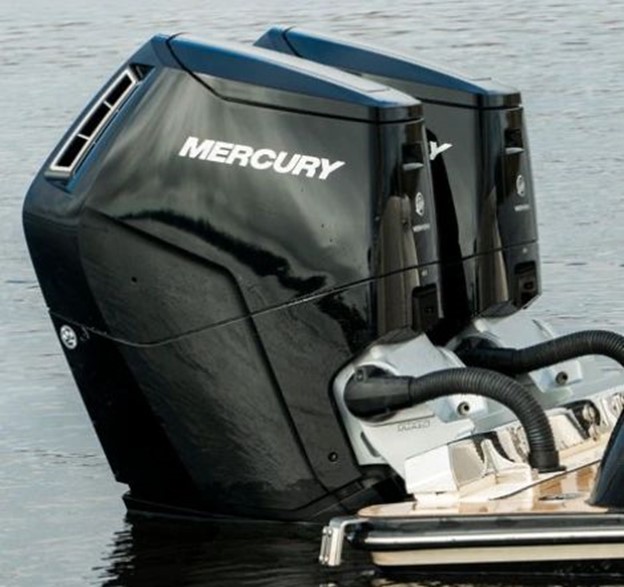 About a month or so ago, Mercury Marine released their new, naturally aspirated four-stroke V12 600 hp Verado outboard motor, as the new king of the outboard segment. Their timing couldn’t have been better.  Up until now the largest outboard motors available have been the Yamaha 425 V8 XTO and Mercury’s own V8 Verado 350 and 400hp motors plus their 450R, a supercharged version of their 4.6-liter V8.  What’s missing from this list is the Seven Marine supercharged 627hp and 527hp behemoths based on the GM 6.2-liter V8 block. Seven Marine, purchased by Volvo Penta in 2018, made the decision to shut down the brand in 2020 as it was no longer consistent with their corporate goals. This left a gap in the mega motor market that Mercury walked right into.

The Mercury 600 V12 has been in development for years. Up until 2020, Seven Marine was the only player in the 450 hp plus outboard size. Presumably, Mercury Marine wanted to challenge Seven Marine and offer their own super large outboard motor. Mercury could never have known that Seven Marine was going to exit the market just months before they announced the launch of their new motor. If they had tried, they could not have planned that better. Now, Mercury Marine is in solo possession of the super large motor market.

Lets talk a little bit about the market for these very large motors in general and then turn to Mercury’s new offering. The horsepower of outboard motors has been growing over a number of years. I still remember back some 40 years ago, when the largest outboard was 150hp. Then, one day I opened the latest Boating magazine, and I was greeted by an ad for the Black Max. The Black Max was Mercury’s new in-line 6 175 Hp outboard. I was impressed! Reading further into the magazine I stopped in my tracks.  Evinrude and Johnson, at the time the only other competitor to Mercury, announced their new V6 200 hp beast. The HP wars were off to the races.

The market for and demand for very large outboard motors has really accelerated in the past five years. Historically, large outboard motors up to 300hp in single or twin configurations were used to power center and dual console boats that ranged in size up to 30 feet or so. In the last five years or so, this type of boat has grown in size in response to the availability of larger engines to a point where vessels up to 50 feet are not rare to see with quintuple motors. Additionally, the development of cruisers, traditionally sterndrive or inboard powered, have entered the market with twin, triple and quad mount motors. This is a new phenomenon as this application allows for much higher speed in this class and improved efficiency compared to traditional gasoline inboard engines. Of course, diesel engines still offer the greatest fuel economy in this class. The newest class of four stroke outboard motors are extremely reliable, efficient and reasonably quiet. They offer easy access for maintenance and replacement.

The new Mercury V12 600 hp offers some new technology not seen in this market along with its large horsepower. The engine, which at 7.6 liters is the largest displacement outboard motor ever made, was built with a two-speed drivetrain that automatically shifts between gears based on the demand for power. Additionally, the engine is built as a fixed mount. Only the lower gearcase turns to direct the flow of water and steer the boat. Both of these new technologies have never been seen on outboard motors, large or small. Lastly, the motor offers a 150 amp alternator, twice the size of what is typically used to power the electrical demands of large craft.

Let’s look first at the two speed drive line. I have no inside knowledge of Mercury’s thinking on this development, but I can take a few educated guesses as to why they did this. You need to start with the V12 configuration. V12 engines are pretty uncommon. Very high performance cars such as Ferrari and Lamborghini use this configuration. V12s are also used in large diesel engines typically over 1,200 hp. In this application the engine is 7.6 liters in displacement. This is not particularly large for high hp motors, in fact Mercury’s own 8.2 V8 sterndrive is larger. The V12 600 hp Verado produces its power at 6,400 rpms which is higher than the operating range of the 8.2 at 5,000. The advantage of a V12 is that they have less rotating mass because each cylinder is smaller and therefore can spin up faster and smoother than a similar displacement engine with fewer larger cylinders. The disadvantage of this configuration is these engines often produce less torque for a given displacement at a given RPM. The torque builds with engine revs and is significant at high RPMs. The result is that at low maneuvering speeds, the new engine likely would lack the torque to move the heavy boats it was designed for with authority in tight quarters without revving up to high RPMs. To solve this problem, Mercury added a first time ever, two speed gear case to allow gearing to provide the low end power necessary for strong slow speed performance and also let the engine push the boat at high speeds. Time will tell how effective and durable this configuration proves to be. The engine also has a duo-prop, or two counter rotating propellers to increase the blade area for a given propeller diameter.  Suzuki was the first manufacturer to offer a duo-prop on an outboard engine, but these arrangements have been common in the sterndrive market for years.

The other new technology introduced on the V12 600, is a fixed motor mount with a steerable gearcase. Traditional outboard motor mounts allow the entire motor to turn from side to side to steer the boat.  The V12 600, fixes the engine and shaft in place and allows only the lower unit to turn from side to side to steer in the same way a traditional sterndrive would work. In fact, from the waterline down, this new motor is quite similar to existing sterndrive applications. Current sterndrives are connected to inboard mounted engines up to 500hp, so the V12 600 has a hp advantage. The advantage of not turning the entire motor is that in multiple mounts, the engines can be placed close together allowing them to fit. Built into that lower unit is a hydraulic clutch that allows for smooth shifting from forward to reverse which is unlike the typical “grind and clunk” that accompanies most outboard motor shifting.

The new motor retails for around $77,000 which in multiple mounts makes this a premium offering. With Seven Marine out of the picture, there is no disputing this is the largest outboard motor available. Whether or not the competition steps up remain to be seen. The demand for such motors may be limited enough that the market can only support one manufacturer. Like the overall recent trend towards hanging an outboard motor on the back of anything that will float, the demand for these super large motors may run its course or not. However, because so much these days is up in the air, we boating enthusiasts will just have to wait and see if Mercury’s new V12 600hp is in fact the king.