Choosing the right battery for your boat 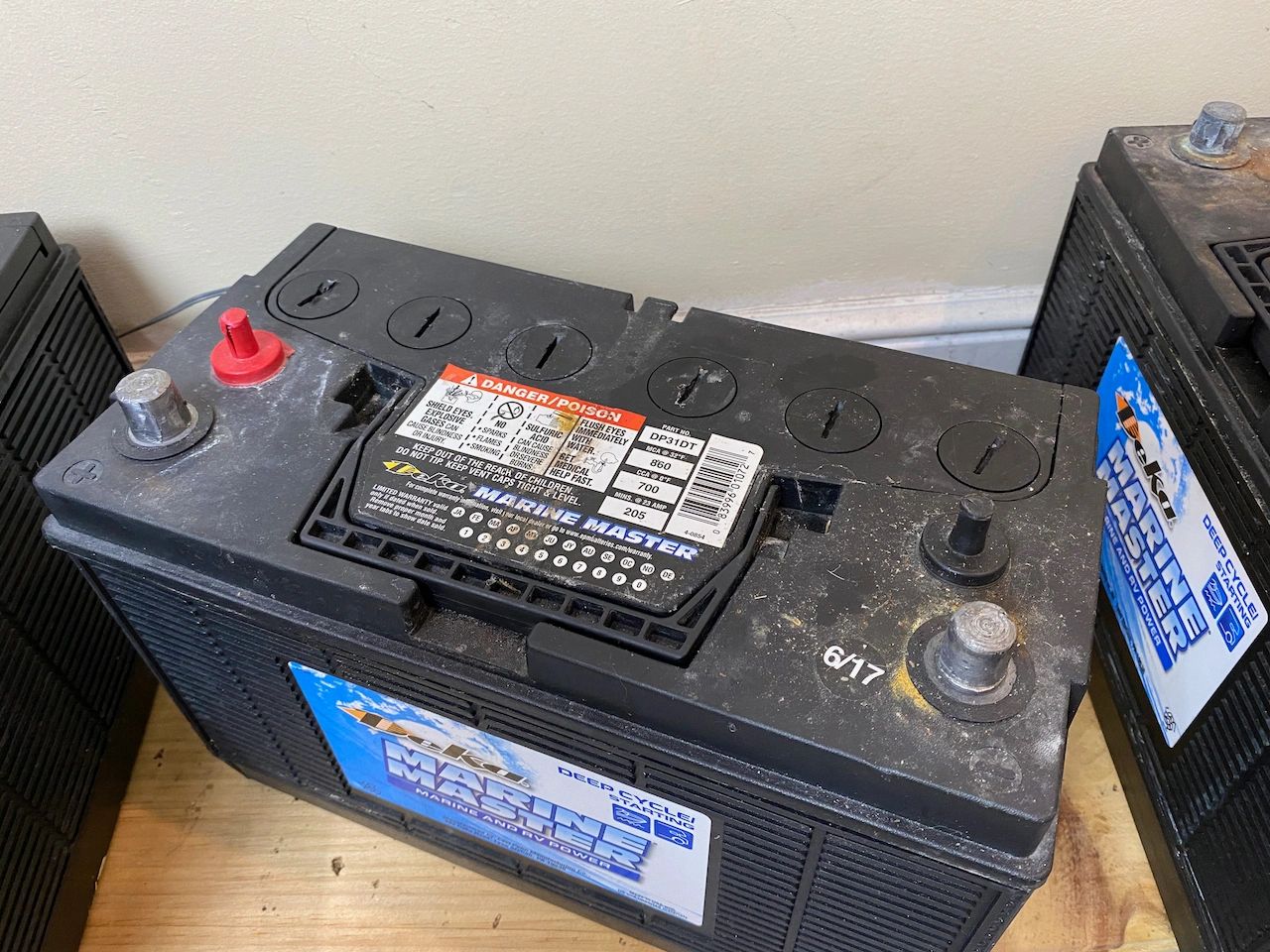 Our issues started when we spent a weekend in Edgartown, MA on Martha’s Vineyard. We were on a mooring for two nights. During the course of the stay, we ran the refrigerator and lights the entire time.  We ran the generator for about two to three hours per day thinking this would be sufficient to keep the batteries charged. It was not. While the batteries held up for the weekend and the engines started when it was time to return to Marion, we unkowingly drew the starboard battery bank (which is also the house bank) down to 10.5 volts. At this level, the batteries can be damaged and will never return to full charge. For the remainder of the season, we had intermittent problems with the starboard bank when it came to starting that engine. We further drew that bank down when we changed the oil in the engines using the Reverso oil pump which is powered by the starboard bank.  Collectively, the pump ran for one hour and twenty minutes in order to empty and refill both engines.  We only ran the generator briefly during the change.

Now at the end of the season, the starboard bank is showing just over 11 volts which is quite low.  A fully charged battery should show 12.7-13 volts. While we think we need to replace at least these two batteries in the spring, there is a further complication. Generally speaking, a charged flooded lead-acid battery will not freeze during the winter.  Because a lead-acid battery discharges on its own, even when disconnected from all current draw, starting at 11 volts, those batteries could easily be depleted by the time freezing weather comes. A discharged battery can freeze and if it does, the battery case can crack in the spring, when the temperature warms up, sulphuric acid will leak out into the boat. Not something anyone wants to deal with.  We do not leave the boat plugged in over the winter to charge the batteries. The only option is to remove the batteries now, test them and determine what needs to be replaced in the spring.

How to decide what battery to purchase is not entirely straight forward. There are options. Batteries can be grouped by size, chemistry, purpose, and output.  For the purpose of this blog, we will focus on 12-volt batteries used for both starting and house power. There are 6v systems that are used in large house banks, but that is a separate conversation.

Group: Group refers to the physical dimensions of the battery.   For boats, the common sizes starting with the smallest is group 24, then 27, and 31. There are group 34 batteries, but they are in fact not larger the group 31.  While your available space will dictate what group size you need, the output of each group generally corresponds with the size because more material fits in the larger case.

Lead-Acid is the traditional battery chemistry that has been used for years and is common on boats and cars. These batteries are dependable usually last for 3-6 years depending on how they are treated and come in a range of sizes, purpose, and output. Lead-acid batteries are heavy, about 60 lbs for a group 27, and can only be discharged to 50% without damaging them. This means you only have about 50% of the rated amp-hours when used in a house bank application. The most common form they take is referred to as a flooded battery. Flooded batteries have lead plates immersed in liquid electrolyte. This type requires periodic checking of the electrolyte level and topping off with distilled water. These batteries are also the least expensive. In addition to a flooded format, Lead-acid batteries can come in Advanced Glass Mat or AGM make-up. An AGM battery is still lead-acid chemistry but is sealed and uses lead plates wrapped in a mat soaked with electrolyte. These batteries are maintenance-free, tend to last longer, and discharge slower than flooded batteries, but are about 1.5 to 2 times the cost. Lastly, there are Lead-acid batteries filled with a gel electrolyte instead of a liquid and are also sealed requiring no maintenance. These batteries dropped in popularity when AGMs came out and are the most expensive of the lead-acid types due to their low production rate, which is usually about twice the cost of an AGM battery.

The other chemistry type is Lithium-Potassium (LiPo). This battery type is quite different in make-up than lead-acid and is newer to the market.  These batteries are characterized by several attractive features including lightweight, about a third of what lead-acid batteries weigh, and being able to withstand repeated full discharge without damage.  They are sealed as well.  The downside is that lithium-potassium batteries are about 3 times more expensive than AGM, making them around $1,000 for a single group 31 battery.  Like all battery chemistries, they require a smart charger with a setting designed specifically for this type of battery.

Purpose: How you will use the battery can help determine the kind of battery you need. There are three primary uses. Engine starting, house bank, and dual purpose. Each of these types are available in the different chemistries discussed in the previous section. A battery designed for starting is capable of delivering a lot of amps for a short amount of time to turn over an engine.  It is not designed to provide a continuous flow of power to house systems as it can deplete quickly. If you need a battery to start your motor, run some navigation lights and the occasional bilge pump, a starting battery will work fine. Batteries designed for house banks can withstand deeper discharge at a steady flow of power. Often, they lack the cranking power to turn over a large motor.  Lastly, there are dual-purpose batteries. As expected, these batteries have some of the characteristics of the previous two. They have the ability to deliver high enough amps to start a motor and can be discharged moderately to provide power for house systems.  It is this last type that Calypso II uses.

Output: Lastly, batteries can be classified by the amount of output. There are three key measures. CCA-Cold Cranking Amps, MCA, Marine Cranking Amps, and Total Amp Output. We will take them one at a time. CCA is often referred to in automotive applications as it describes how much cranking power a battery has for thirty seconds at zero degrees. Batteries lose some of their output as the temperature drops. If you own a car, you need to know that the battery has sufficient power to start at below-freezing temperatures. MCA is similar to CCA except the test is performed at 32 degrees. For most of us, we do not boat in temperatures anywhere close to that so these measures are conservative. You can check your engine’s specifications or with the manufacturer to determine how many MCAs your engine requires to start. In the case of Calypso II, for example, the Caterpillar 3126 engines need 1,000 MCA to turn over.  This will require putting two batteries in parallel to provide that level of power.

The last measure is Total Amp-hours. This is a measure of how many amps the battery can provide before requiring charging in a house bank application. For example, a 90 amp battery can provide 45 amps of power without dropping below the minimum 50% before requiring recharging. You can calculate your house load by adding up all of the amp hours of your electrical items that require power. That will tell you how long they will run on that battery. If you put multiple batteries in parallel, then you can double or triple your house capacity.

While all of this information may seem daunting, a good battery store can help you make the right decision based on your needs.