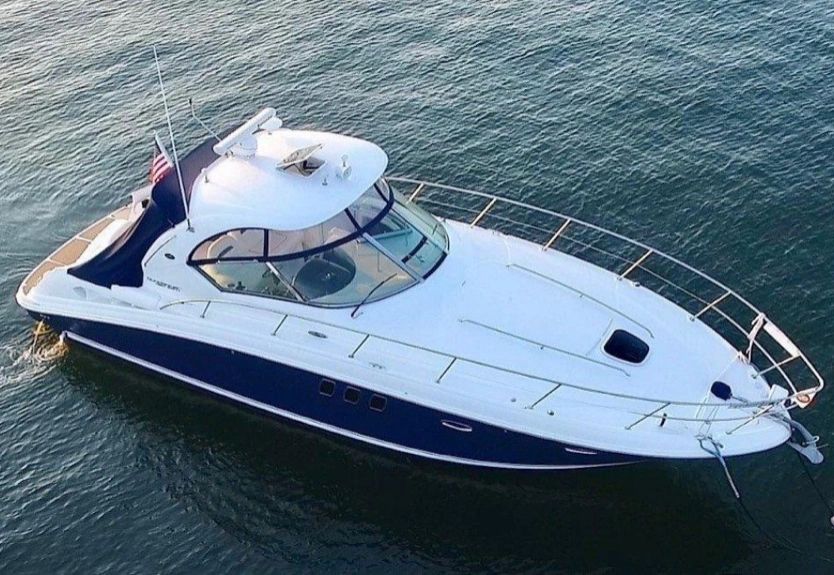 Over the many years I have been a boat observer and owner I have noticed an interesting artifact. Having owned two boats, both American designed Searay’s and made and having had the opportunity to go aboard many others, I have noticed some interesting differences in boats that are designed and built in America versus those that are designed and built in Europe. What I am referring to are boats that are designed and sold for the American market but have roots in Europe. In the small to midsize cruising market, 30-50 feet, the American brands are dominated by Regal, Cruisers, Searay, and Monterey and from Europe brands include, Beneteau, Jeanneau, and Sealine to name some of the larger ones.

American based designs tend to be focused on day boating and entertaining larger groups.  What this often translates into from a design perspective is open cockpits, convertible lounge type seats and helm decks that are open air. More recent designs have incorporated a “summer kitchen” on the main deck, which can include an electric grill, refrigeration, and a sink area to prep food. This development has been a great addition to the functionality of these spaces and can be found on designs from Europe and America. European designs are more focused on cruising which is to say the bridge decks are often enclosed in a coup style arrangement creating a main deck salon. The galley up arrangement usually goes along with this layout. American style express boats often forgo this for more entertainment space. The addition of large recessed bow seating areas on these boats has also started to make a strong appearance but requires compromise in the accommodation space.

One of the largest differences is in the accommodation area. The boats from Europe tend to include multiple sleeping cabins depending on the size of the boat. It is not uncommon to find two or more cabins on a 36 foot cruising boat all with doors for privacy. What this allows for is that the boat can comfortably sleep a family with older kids or a two couples while affording all on board privacy. Conversely, American designed boats tend to have an open layout in their accommodation plan. Forward you often find a convertible dinette that becomes a double with the use of a filler cushion. Similarly aft or in the mid cabin area, seating areas with television are used which also convert to sleeping areas. Both of these areas are open to the main cabin and often have a curtain to offer basic privacy. We have owned both styles, i.e. an open plan Sea Ray Sundancer and our Sedan Bridge that has two staterooms and two heads.

Which layout is best for you depends on how you will use the boat. Let me offer this perspective, however. Most of us want to enjoy our boat in the sunshine. We bring friends and family on board for a day of boating often to a beach or sandbar for swimming. Once there we break out the grill and enjoy a picnic. On our Sundancer, we kept the overhead canvas up all the time so we had shelter from the sun. Time was spent in the cockpit, going below only to change into swimwear or use the head. We never sat below at the table. On overnights, time was spent underway or once at the destination, exploring the surroundings, not below. When it came time to turn in, the lack of total privacy was an issue for the family. We certainly could not have friends overnight with nothing but a curtain separating the beds from the main cabin.

I mention this because I am at a bit of a loss as to why American designers lay out their accommodation plan this way. If the primary purpose of the cabin is sleeping and changing clothes, then this does not work. Now I have to believe these designs represent feedback from buyers and I would love to know how they use their boats. European designers also incorporate feedback from their buyers in developing their designs as well. It may be worth noting that the European builders are far larger than their American counterparts which may indicate that their design philosophy is more successful. It does not help that Sea Ray, who once commanded the express boat market in America, cratered a few years ago, could not be sold by their parent Brunswick and are only now rebuilding their portfolio.  As I mentioned, I have owned two Sea Rays and they make an excellent boat!  We love the 400 Sedan Bridge which interestingly is closer to the European design then their other boats.

As I have often said, consider closely how you think you will use the boat when evaluation a potential purchase. If you plan to overnight with more than just one couple, an open accommodation plan may not b ethe right choice.