Hurricane Isaias is coming, how are you preparing? 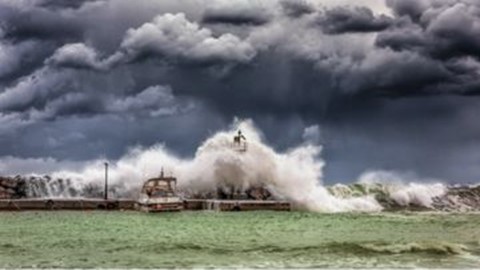 As I sit here writing on Monday, August 3, 2020, Hurricane Isaias is bearing down on the Carolinas, having already passed over the Bahamas and moved up the eastern Florida coast. The current storm track shows the hurricane moving northward up the east coast toward New England, eventually splitting Massachusetts, where our boat is moored, and potentially causing damage on both sides of its track.

Is your boat in the water? What’s your plan to keep it safe from Hurricane Isiasis?

Knowing the hurricane is coming, I need to evaluate my response and level of preparation for Calypso II. For our Blog and YouTube channel followers, you know that Calypso II is kept on a mooring in Sippican Harbor in Marion, MA on the south coast of Massachusetts – it’s a well-protected harbor that opens to the southeast. In the 7 years that we have had our boats in Sippican Harbor, we have been fortunate to avoid any major storm-related damage beyond low-level residual effects of the wind.

A little background on how hurricanes work

In the northern hemisphere hurricanes spin counterclockwise, and in the southern hemisphere, they spin clockwise. This fact is due to a principle known as the Coriolis Effect which boils down to the effect the Earth’s rotation has on wind on different parts of the globe, i.e the poles vs. the equator. Rotation matters because in the northern hemisphere, areas east of the hurricane’s eye get higher winds than those areas west of the eye. Larger amounts of rainfall can often be found west of the eye as well. Areas closest to the eye have the highest winds.

Start by assessing the size and track of the hurricane

The way I go about evaluating my response to any forecasted storm is to assess the size (i.e., the diameter of the eye) and track of the hurricane. I use Windy.com, a site I mentioned in an earlier blog for boating “go, no-go decisions”. I also use NOAA marine weather for local forecasting of wind speed and wave height.

Because Isaias is tracking up the middle of Massachusetts, and Sippican Harbor is east of that, we are on the side of greater winds. If the storm were going to produce significant winds above Force 8 on the Beaufort Scale (34-40 knots), then additional considerations are required. The most important thing to evaluate is how well your boat is secured. If it is on a dock, are the lines doubled and is there chafe protection on all areas where lines come in contact with a hard surface? Are there fenders in place to prevent contact with the dock or is your boat suspended between two docks? If the boat is on a mooring like Calypso II is, are you confident the mooring will hold? Often a mooring is safer than a dock because there is nothing to hit as long as the ground tackle holds.

If conditions are strong enough, I evaluate if I need to have the boat pulled out of the water and secured on land. The mooring that holds Calypso II is a helical screw type that is screwed into the bottom and is very strong. Her mooring pennants have chafe protection on them and are secured to two cleats on both the port and starboard side.

The greatest vulnerability that Calypso II has is her bridge canvas enclosure, which can act like a sail and increase the boat’s movement on the mooring and cause it to tack back and forth putting more strain on the mooring pennants. Additionally, the enclosure itself can be blown out and damaged by high wind. If that happens, the bridge is then open to the elements including rain. While everything on the bridge is waterproof, the risk of damage to electronics is greater.  With a strong wind above Force 7, I could remove the bridge enclosure and cover the area with a flush canvas to keep the rain out but would not act as a sail and has a lower chance of being blown out.

Check with your boatyard

Another great resource is your boatyard and fellow boaters. Talking to both can give you a sense of what others are doing and what might be appropriate for you. Isaisis is currently forecasted to bring winds in the 30s with gusts to 40 knots. At that level, I believe Calypso II is secure on her mooring and that the canvas enclosure, while at some risk, should withstand the level of wind.

The decision on how to safeguard your boat when a hurricane is forecasted is ultimately each boaters to make. I hope some of the resources and methods I use will help you evaluate your own situation. Stay safe!